Impacts of the COVID-19 on Big Industries

Home » Blog » Impacts of the COVID-19 on Big Industries

Impacts of the COVID-19 on Big Industries

COVID-19 was first diagnosed in China, has now spread in over 214 countries, infecting more than 25 million people, up till August. The recession caused by this pandemic has never been witnessed before since the great depression. Experts estimate that it will bring down the GDP growth rate of many major economies by great margins. Assuming Coronavirus is diminishing and lockdowns are easing, it might still take years for the world to fully recover from it. Coronavirus has impacted different sectors, differently. Manufacturing and traveling sectors are the most impacted, whereas the technology and banking sector are the least affected.

The Coronavirus pandemic has plunged the world economy, forcing businesses to shut down and rise in the unemployment rate, affecting almost all of the sectors of the economy. Experts estimate that it will take at least a year to develop a vaccine for COVID-19. Therefore, the world will have to adapt to a new way of living, like wearing a mask. Although the COVID-19 has impacted economies on a global level, actions and policies are being implemented to minimize the scale of negative impacts, such as reducing the interest rates or permitting the deferred payments. Governments around the world are introducing economic relief programs that include reducing or exempting taxes and utility bills and providing financial benefits to businesses.

The Airline industry of the US is facing the biggest blow. Most of the countries placed an international travel ban on flights and sales for domestic flights are already declining because of the precautionary measure of staying at home over traveling. There will be a spike in the unemployment rate due to job losses in the travel industry; many directly or indirectly will be affected by it. Hotels and travel agencies are going to face direct impact of travel restrictions. China has resumed its flight operations, which provides the sight of hope for other countries, Majority of travelers, traveling to the US, were from China. The recovery phase has begun, but the recovery of the Airline industry is going to be lengthy and complicated.

This year is going to be disappointing for those who were planning a tour or vacations. Many events have been called off due to restriction of a gathering of people in one place, bars and gatherings are being fined by governments around the world. Now many are trying to revive the tourism industry, however, these effects might be long term because of the overall decline in spending power and rise in digitalization. Many official business tours have now been shifted towards online meetings, and this trend is rising. Tourist-depended countries like Macao and Maldives will face troublesome consequences due to the loss of a significant portion of their GDP. 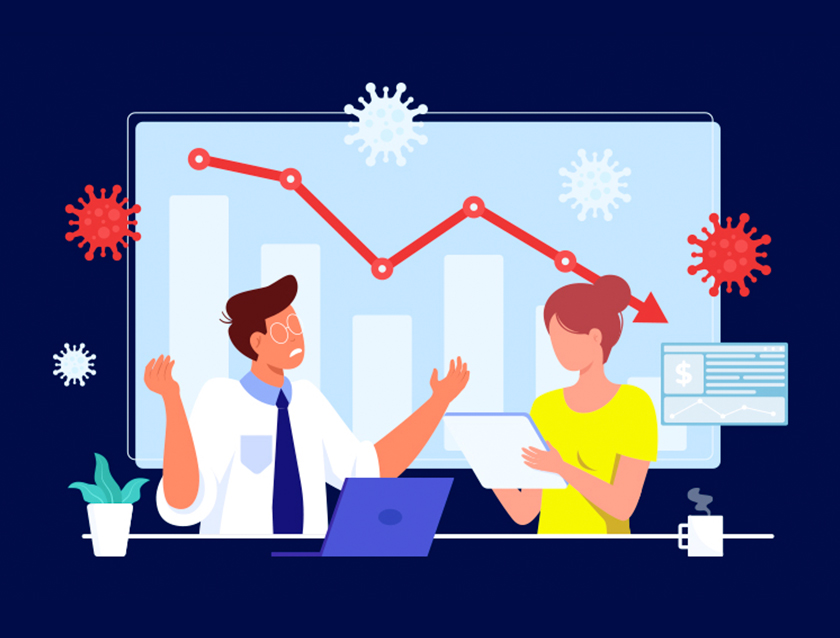 The manufacturing sector contributes a big chunk to the GDP of any country. Many businesses are facing supply chain problems and manufacturers are forced to shift on domestic suppliers due to import restrictions. The closure of factories, mainly in China, created a shortage of stocks which has affected many retailers across the world. For example, many suppliers of the automobile industry have shut their plant resulting in the non-availability of cars and parts. Suppliers are complaining of goods being stuck on ports, which has lengthened the time frame of manufacturing products. It forces plants to shut down their operations due to a shortage of raw materials and on-site workers, as some jobs cannot be performed remotely.

The retail sector includes all essential and non-essential items. It accounts for at least a few percent of GDP in the economy. Varying impacts are being witnessed in this sector. The sales for essential items increased slightly, whereas the decline in sales of non-essential items was huge. There is a spike in demand for certain commodities and household items. Several problems are faced by the retail sector, first being the supply chain. Retailers are short on stocks and having difficulty in restocking supplies. Second, there are many areas where lockdown is still in place and people are not allowed to leave homes. E-commerce retailers are less impacted than others, which may push other businesses to shift towards digitalization.

The GDP contribution of the agriculture sector accounts for about 2 to 16 percent, depending on how agriculture intensive that country is. Currently, governments around the world have exempted most food-related businesses from lockdowns and termed them as a basic necessity, so there will be more indirect impacts than direct. Most of the jobs in the agricultural sector are mobile and seasonal, but imposing restrictions on traveling has disturbed the mobility of workers. For example, some workers are hired on a seasonal basis from different countries and travel to the US only in peak seasons to accompany in harvesting, but due to travel restrictions, they might miss the seasonal harvesting this year. Non-availability of the workforce may lead to the loss of the harvested crops. On the other hand, farmers are facing difficulty in maintaining an adequate supply of raw materials like seeds and pesticides because of the supply disruption.

Lockdowns and travel restrictions have brought most businesses to a halt, logistics being one of the most impacted. The transportation and logistics sector contributes some amount of GDP to the economy and plays a vital role in supporting the key operations of other businesses. However, nowadays many companies are facing hurdles regarding logistics, especially in cross-border transport. Rather than importing supplies from other countries, businesses should locate suppliers locally or produce on their own. It will also improve current account balance and create jobs in the economy. Online public transportation apps like Uber and Careem faced a halt in their operations at the beginning, however now operations are resuming back to normal with a strict guideline on Standard Operating Procedures that needs to be followed while using the app. An online renting app called Airbnb has lost a fair share of business due to the travel ban. Many countries have now uplifted the ban on public transport services, but standard operating procedures have been introduced while using public transport, like wearing a face mask and maintaining distance.

Although banks are not as hard-hit as some other sectors of the economy, they are a crucial part of any economy, and the banking sector should be stable for a country to run smoothly. Moreover, they are responsible for maintaining the flow of funds, which fuels the businesses. The biggest problem banks are currently facing is the default or late in payments from its customers. Businesses are making record losses and some filing for insolvency, whereas several workers have lost their jobs amid the pandemic. Banks fear that some might never be able to pay back their loans, which may create a situation of a debt bubble. Countries should reduce the interest rate, to boost up economic activities, and to reduce the burden on borrowers. Insurance companies, on the other hand, are facing two serious problems. First, the mortality and morbidity rate will jump, leading to more life claims against insurers and a huge spike in payments for hospital bills. Second, the insurance sector will be facing financial shock due to reduced interest rates and insolvencies.

The Healthcare System of the countries has a limited scale and capability to serve patients, due to COVID-19, there has been an increase in the number of patients by great margins, therefore, increasing the demand for hospitals and ventilators, and more jobs in the healthcare sector. However, the hospital staff is facing quite the opposite, doctors and staff are facing pay-cuts and lay-offs, the pandemic has created such a health crisis that the healthcare system of several countries is collapsing. Some hospitals have restricted admitting new patients, while some are charging a higher fee to provide services. The mortality rate is dependent on the condition of the healthcare system, and an inadequate healthcare system will have negative consequences on the economy. Economies should invest in the healthcare system to avoid similar circumstances in the future.

The IT sector observed different trends regarding the impact. Coronavirus has favored some technological companies, whereas some of them were not fortunate enough to benefit from it. E-commerce giant Amazon’s sales increased tremendously during the lockdown. Streaming and conferencing Applications like Netflix, Zoom, and Spotify saw a surge in demand. Few of the tech firms faced problems in managing the inventory and supplies due to lockdown. Many companies have introduced remote working solutions by using Apps like Zoom and Skype. More than half of the US employees were working from home during a pandemic. The Tech industry will witness the boom in the coming years due to the realization of its importance, and digitalization is expected to progress at a rapid pace. On average, businesses that were using an online platform were less negatively affected than those with no digital presence. Therefore, more businesses should adapt to the new era of digitalization.

Get IT Consultancy Services Now